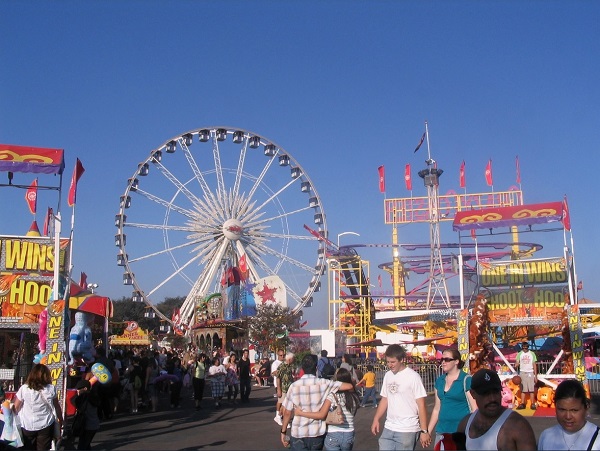 Going barefoot at most state and county fairs is usually not a problem; though some, especially state fairs, do have “official” dress codes that include shoes being required. Whether that rule is actually enforced or not depends on which fair it is.

Some fairs have dress codes, some don’t

I recently reviewed the websites of 46 state fairs and 2 large county fairs, and I found that only 13 had any posted “rules and regulations” for visitors on their sites, with only 10 of those rules specifically including a shoe requirement.

As to the fairs that had no specific rules for visitors’ attire on their sites, I sent each of them an inquiry as to whether or not they had official dress codes. I did not specifically mention “shoes” in my question. I received responses from 5 state fairs saying that shoes were required, and 12 responses stating that they had no dress code at all for visitors. As of right now, my inquiries to 15 other fairs have not been answered yet.

The fairs that say they require shoes, either on their websites or in an email response, are these:

Fairs that either have no official dress code for visitors or have no specific shoe requirements are these:

The above lists will be updated as I receive any new information.

Inquiring about dress codes may not yield accurate or useful answers

Of course, as many of us barefooters have learned over the years, asking a business or similar entity if they have a dress code is fraught with risk and uncertainty as to receiving accurate and unbiased answers.

As to specifically asking if shoes are required or if it’s “OK” to be barefoot, a very wise rule of thumb is, “Never ask in advance.” The majority of businesses and similar entities have never given a “shoe policy” any thought at all, because there was never any issue or need to. But putting an owner, manager, or other spokesperson on the spot with such a direct question as to some sort of barefoot policy is almost assuredly going to get a “better safe than sorry” response.

I was careful in my inquiries to fairs not to mention “shoes” or “bare feet” to try to avoid any knee-jerk negative reaction. Even mentioning “dress codes” when none were already stated on the websites may in many cases have caused the “better safe than sorry” response of “shoes and shirts are required,” when in fact, there may have been no such official policy.

For example, this interesting response was received from the New Jersey State Fair, which has no dress code posted on its website:

“Good afternoon,
Thank you for your interest in the NJ State Fair. There is no specific dress code, just the basics: shirt, pants/shorts, shoes. As long as what needs to be covered is covered in a taste full way. I hope this helps.
Warmest Regards…”

I responded back to them:

“Thanks for getting back to me. But I’m a little confused. You said there was no specific dress code, but then listed one. Of course being clothed within the law to avoid indecent exposure would be obvious and doesn’t need a specific dress code. However, shoes or shirts (for males) as customers or patrons of any business are not requirements of any law or health code. So, are those items formally required at the fair by a stated dress code, or not?”

“Not that I’m aware of. Sorry for the confusion.”

So, does the New Jersey fair require shoes or not as an official dress code? Probably not. Their initial response was the knee-jerk reaction that I mentioned above.

So, the lists and information above may not need to be taken as “gospel,” but only somewhat general guidelines to be aware of. In fact, I have read anecdotal accounts of barefooters going to some of the “shoes required” fairs barefoot and having no problems from anyone while there.

In 2011, the N.C. Mountain State Fair posted a ‘Shirt and Shoes Required’ sign at its gate

There is an interesting situation in North Carolina. They have two official state fairs. The regular one held in Raleigh, and a smaller one held near Asheville, NC, called the North Carolina Mountain State Fair. That fair opened in 1994, and from 1994 through 2010, they had no dress code whatsoever. During that period, I attended that fair many times, always barefoot, and never a problem.

When I attended in 2011, I was shocked to see a large new sign that had been installed at the gate reading, “Shirt and Shoes Required.” I was barefoot as usual and entered the gate without an issue from anyone, where I spent the day barefoot with no hassles.

I later emailed the fair director to see what was going on. He called me later and left a voice mail message in which he stated that since there had been a female “Go-Topless” rally in Asheville a few weeks before, they were concerned about women showing up at the fair with bare breasts.

I found that justification so ridiculous it’s almost laughable. First, the rally he spoke about was a one-time thing that took place simultaneously with similar rallies in 11 other cities around the country, sponsored by the GoTopless.org organization, which holds these rallies in various cities around the country every year at about the same time. The chances of something similar taking place a few weeks later and at the fair were practically zero.

And third, did they really think that if another topless demonstration were to be organized around there and if they decided to do it at the fair, the mere presence of a sign would stop them? Not likely.

Over the next few days, the fair director and I exchanged several emails in discussion of the matter. I asked him if anyone in the prior 17 years the fair had been in operation had reported an injury to a bare foot. He told me no one had, but that recently someone had been injured when their flip-flop got caught in something. I suggested that perhaps he should then just ban flip-flops from the fair, not bare feet, for which there was no history of any problems at all. He had no answer for that.

I didn’t care for being an exception so much, and really wanted that sign removed. So later in 2013, I sent the fair director another email asking him once again to remove the sign, or if he couldn’t remove it, who could?

He told me to contact the attorney for the North Carolina Department of Agriculture, which has control over fairs in North Carolina, and gave me her name and email address.

I contacted the attorney, and her rather curt answer was that not only would they not remove the sign, it would, from then on, be strictly enforced for everyone.

Following that, I made additional efforts to get the sign removed, which I have written about in detail in an article entitled, “The N.C. Mountain State Fair refuses to remove its rude sign.”

The N.C. Mountain State Fair is not the only fair I’ve attended many times while barefoot with no problem from anyone. One of the larger fairs in the country is the Orange County Fair held each year in Costa Mesa, CA. It lasts approximately four weeks, and the 2018 attendance was 1.5 million. They do not have a dress code (confirmed by email in my recent research), and during the 80s, 90s, and early 2000s, I attended many times, always barefoot (and sometimes shirtless), with no problem at all. It has a very friendly and welcoming atmosphere that is respectful to all fair visitors, regardless of how they choose to dress.

(I guess there’s no imminent danger of topless women invading that fair which would necessitate that everyone wear shoes, as is the case with the N.C. Mountain State Fair.)

Why do some fairs have dress codes or unwelcoming signs at their gates?

As with stores and other businesses, the reasons fair managements decide to create dress codes and/or install rude and unwelcoming signs at their gates vary. But almost always it’s based on some combination of misinformation or misunderstanding of liability issues and ingrained personal bigotry against the free will choices of certain people who may choose to dress in an unusual or non-standard way.

Often, these dress codes or policies against bare feet are there only as a just-in-case legal protection. If someone were to injure his or her bare foot, the business or fair could then say, “We’re not responsible, because we warned you that shoes were required.”

Of course, they wouldn’t have been responsible anyway, as a barefoot person entering any business facility would always be deemed to have personally  accepted responsibility and risk, simply by having made that personal free will choice. The business or fair usually does not realize that requiring shoes is in effect accepting the responsibility themselves for any potential injuries that the shoes they required may cause. And note, they always consider flip-flops – the most hazardous and accident-prone footwear on record – to be “shoes.”

How does anybody know for sure if a fair will welcome them barefoot or turn them away?

Many fairs that actually have official dress codes requiring shoes may not say a word to a barefoot person. I know that from anecdotal 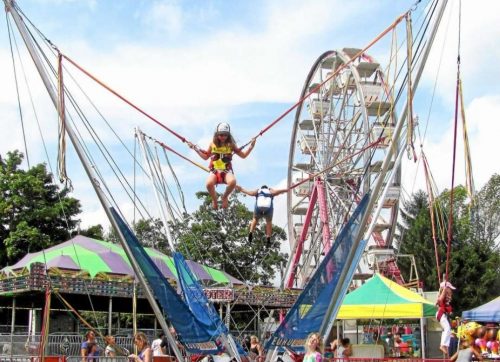 accounts I’ve read from various barefooters around the country. On the other hand, some fairs may have guards standing right inside the gates ready to immediately reject the entry of someone not wearing shoes, or may confront you later if you manage to make it in without being questioned.

If you’ve never attended some particular fair and are not familiar with their attitudes/friendliness toward their attendees, check first to see if they have an official dress code requiring shoes (see lists above). If they do, on the chance that they may enforce that, you may want to bring some kind of easy-on/easy-off shoes with you, like flip-flops, stashed away out of sight, just in case you are confronted and really do not want to leave the fair. Or just take your chances and be prepared to leave if you’re forced to.

If the fair has no dress code shoe requirement of record, it’s unlikely anyone will hassle you for being barefoot. Just go barefoot, and don’t worry about it. You’ll most likely have no problems and can enjoy the fair in comfort.