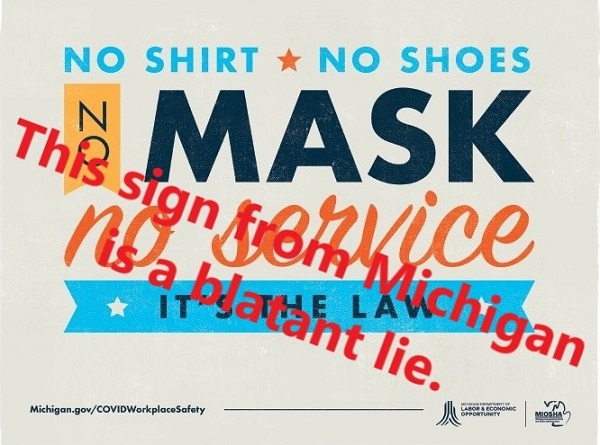 The image at the top of this page is an example of the misleading signs being posted on a few official websites. This particular one is not only misleading, it is a blatant lie. There is no ‘law’ that requires a shirt or shoes, whether with a mask or otherwise.

In the last several months, it has come to my attention that several cities and other jurisdictions in the U.S. have been promoting signs or posters that are conflating a mask wearing requirement (due to the current pandemic) with a shoes and shirt wearing requirement. This not only makes no logical sense, it is sending a false message about the importance of masks.

Key West, FL, was apparently the first city to make this short-sighted decision

In May of 2020, the mayor of Key West, Florida issued an executive order requiring COVID-19 preventative masks to be worn by everyone inside businesses. Pursuant to that, the mayor’s office also sent out posters to all businesses that they could use to remind customers of the new requirement. In addition to reminding people to “mask up,” as required by the order, inexplicably the poster also included this wording, “No shirt, No shoes, No mask, No entry.”

In June, I wrote about that situation in the article, “Key West, FL, has seriously blundered in its COVID-19 fight.”

Since that article, though no Key West city official has gotten back to me to indicate any changes, it would appear that the original poster that referred to “shirt” and “shoes” has been abandoned, because a revised poster is now included on the “COVID-19 Informational Mask posters” page of the website.

Since then, at least six other U.S. cities or local areas have also posted mask requirement posters or signs on their websites, all with at least one containing the words, “No shoes, No shirt, No mask, No service,” or similar wording (the order of “shoes” and “shirt” is sometimes switched).

After Key West, the next place I found out about that had started promoting a similar misleading mask requirement poster on its website was Knoxville, TN. Once again, I and other members of the Society for Barefoot Living contacted the mayor as well as members of the city council.

Within a few weeks, they wisely removed the inappropriate poster from their website.

Subsequently, I was made aware of similar posters being promoted on Cape Cod, MA, by a task force representing the 15 towns on that coastal peninsula. They also quickly removed their offending posters after I and several other members of the Society for Barefoot Living contacted them, and especially due to the efforts of one member who lives there.

In July, I wrote about that situation in the article, “Cape Cod has corrected its misleading COVID-19 signage.”

The next city I heard about that posted a sign that included a reference to “shoes” or “shirt” was New Orleans, LA. Several contacts made by me as well as other SBL members have so far failed to get any response at all from the mayor or anyone else with authority to remove the poster from the website. I did get a brief response from one city council member, but it only courteously acknowledged my contact.

The next area I became aware of that had done the same thing was St. Louis County, MO. Again, I and other members of the SBL made contact with county officials. One response was received, but nothing has been done to date to get that poster removed.

A few weeks ago, I became aware of a similar sign posted on the website of the city of Pensacola, FL. I and one other member of the SBL have contacted the mayor there and members of the city council. We each have received several responses from the mayor, who so far has refused to remove the offensive sign from the website. We also have received several very favorable and supporting responses from one particular city council member.

The state of Michigan posted a sign that is not only misleading, it is a blatant lie

And finally, probably the most egregious of all these situations, I was informed that the state of Michigan had posted a similar sign on its website that is not only misleading, it is blatantly false. It states, “No shirt, No shoes, No mask, No service, It’s the law.” It is NOT the law. Masks are required per the governor’s executive order, so that part has the force of law. Wearing shirts or shoes is NOT “the law.”

The sign is a blatant lie. I and others have contacted Governor Whitmer as well as the director of the Department of Labor and Economic Opportunity (on whose website the sign appears) about the problem, but so far, no response from anyone.

The reasons usually given for posting such signs are strange indeed. The reason most often given is something to the effect that “‘No shoes, No shirt, No service’ is a commonly seen, familiar, and accepted phrase, therefore adding ‘No mask’ to that will put the new mask requirement into a context that most people will understand and accept.”

This reasoning is seriously flawed for several reasons:

Those of us who don’t wear shoes aren’t the only ones who have noticed the absurdity of including shoes and shirt requirements with a mask requirement on signs. This article, “COVID-19 sheep and their absurd ‘no shirt, no shoes, no mask, no service’ bleats,” appearing in The Washington Times in July, does a pretty good job of detailing how ridiculous such a combination is, though I do not share the author’s apparent personal opposition to any governmental mandatory mask wearing order at all.

The cities, state, and local areas mentioned above that have posted and promoted the rudely worded signs with the ridiculous and illogical inclusion of “shoes” and “shirt” along with a “mask” requirement fortunately are exceptions. Those signs are also particularly offensive by including the blunt term, “no service.”

The vast majority of cities, states, and other local areas have also posted suggested mask requirement signs for businesses to use – but worded in an honest and non-misleading way, and usually showing sensibility and respect for the public that will see them.

For example, this much better sign – one of the actual signs being promoted by the Cape Cod Reopening Task Force. No need for “shirt” or “shoes” to be mentioned, and especially no lies about a non-existent law.

We need to continue to fight this problem

As of this writing, I and others are still in the process of trying to convince the above places that still have the misleading signs to remove them. This article will be updated for any changes as they may occur in the future.

It would be very helpful if everyone reading this could also contact these places that are still showing the misleading signs on their websites, and urge their removal.

2. Conflating “shoes” and “shirt” on a sign with “masks” sends a clear message that shoes and shirts are of equal importance as masks to prevent the spread of the COVID-19 virus. And, that a lack of shoes or a lack of a shirt will contribute to the spread of the virus exactly the same as a lack of a mask. That is a false statement, and not one that should ever be promoted by any city, state, or other governmental jurisdiction. Not only a false statement but one that promotes ignorance and misunderstanding. We all know how dangerous ignorance… Read more »