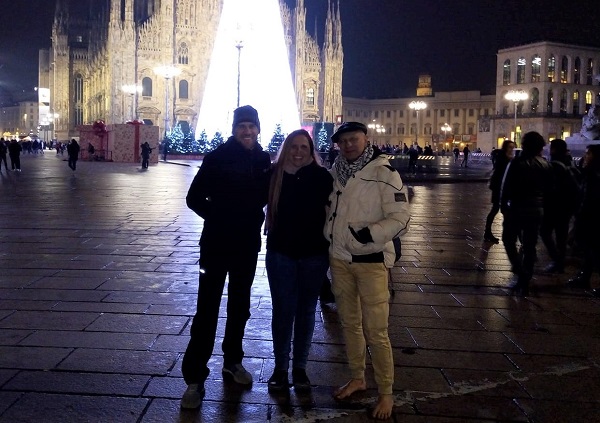 On various barefooting groups and forums over the years, I’ve seen many posts reading something like the following:
“The only problem I have going barefoot is my family. They say it embarrasses them if I’m barefoot in public with them.”

You, and only you, are responsible for your bare feet, not someone else who may be with you at the time

It is strange how some people can get embarrassed for the actions or appearance of someone else who just may be with them at the time. Of course I’m not talking about where someone is truly responsible for the appearance or behavior of another person – such as a parent with a child. I’m talking about a grown person’s relationship with another grown person.

Do I have to dress exactly like you in order for you to feel safe and secure?

I think any grown person who has that kind of problem with another grown person, whether related or not – that is, being embarrassed by how the other person may choose to dress – is trying to take on the roll of parent to child. And is, in effect, treating that person like a child, in my opinion.

My family respects my right to live barefoot

Maybe I’m just lucky, or maybe my family is just more open minded and accepting than some families I’ve read about, but no one in my family has expressed an attitude of embarrassment due to my barefootedness around them, or at least no one’s ever said anything.

I recall a good example of a personal family interaction which confirms the way I feel people should treat other people and respect their individuality. My daughter works in the corporate office of a large regional supermarket chain. Back a few years ago, they were having a grand opening of a brand new store, and she invited me to go there with her.

As a rule, I would never ask anyone if it is “OK” for me to be barefoot. But in this case, knowing that many people in my daughter’s office would be there, and knowing that a lot of the corporate executives, such as the president, executive vice-president, and chairman of the board, and others would be there, I decided to make an exception and ask her if she would have a problem with my being barefoot with her during the visit (I really didn’t want to take any chances of her being embarrassed by my appearance).

To my delight, she replied that what I chose to wear or not wear had nothing to do with her whatsoever and had no effect on her, so she was in no way going to try to tell me how to dress. So I was happily barefoot as she took me all around the store introducing me to various top management people, including the president of the company, with whom I shook hands and exchanged some small talk. It was a great experience!

Human beings are not possessions

There is a somewhat related issue here in the area of human relationships, interactions, and perceptions. There is a big difference between another human being – such as a wife, husband, other family member, significant other, friend, etc. – and material possessions. Possessions are things you own.

And those possessions can (though not necessarily always) reflect your personal values, accomplishments, even success in life. Those possessions often include the clothes you wear, the make of car you drive, your neighborhood and size of house you live in.

People are usually judged by those possessions, whether justified or not. It is a natural part of the human psyche. So the fact is, you can often influence what others think of you by your choices of possessions. That can include your manner of dress, as well as accouterments or decorations added to your body, such as tattoos, piercings, beards, rings, bracelets, etc.

It is true that sometimes men will consider their wives or girlfriends as their possessions, to be used as status symbols of success – hence the term “trophy wife.” Women sometimes have similar relationships with men.

But these are not healthy relationships. No grown human being should be considered the possession of another and thus be under the control of the other and dictated to as to how they must dress.

Whether it’s with a spouse, friend, or other family member, respect for the other person’s personal rights and choices is always the key to happiness in any relationship.

We often take this for granted because it’s so common, the way people policy themselves, but it’s a good reminder. We are free, and no one should be treated like a possession. I’ll be more aware of it from now on!

First off, kudos to your daughter Kriss for her open mindedness. When I was in my late teens, my sisters would comment on my bare feet, saying things like “your going out tonight barefoot?!”. Eventually they got used to me always being barefoot and it became the new normal with me. As a 55 year old man, I have a life partner and he is very accepting of my bare feet. When people tell others how to dress, it’s definitely a control thing and not a sign of a healthy relationship. I feel a relationship of any kind between adults… Read more »

Definitely! I was going to make a similar comment. The issue is perhaps not so much one of embarrassment but one of control. Those who comment that they are embarrassed or ask you to put on footwear for their sake are seeking control. For whatever reason they value footwear for all and are pushing their values onto you. That is a toxic relationship in my view. Great to read of your respectful relationship Neil and congratulations Kriss on another thoughtful post.

Kriss, I am very much in support of you & all of us who see Barefootedness as a completely natural, fun, healthy in a variety of ways type of lifestyle which would be nice if others didn’t on occasion denigrate it/us. I run around Barefooted in baggy cargo pocket short pants, picture T-shirts and that simply is me. Most of those I see in stores seem to accept me as I am. Some are inclined to grin or give me a positive indication regarding my bare feet & that really is encouraging. Among other things I have Autism Spectrum condition… Read more »