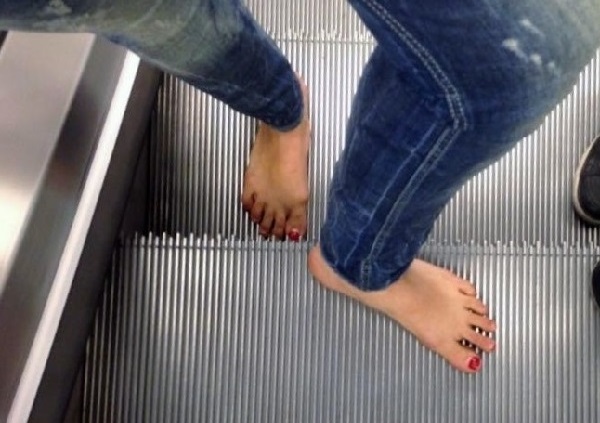 It may seem counterintuitive, but all factors considered, bare feet are actually safer than shoes when riding an escalator.

So, why do signs that list various safety warnings on most escalators in the U.S. include “No Bare Feet”? It’s out of a misplaced fear of liability, based not on facts or actual experience, but on the irrational assumption that anyone barefoot must be pretty stupid or not in their right mind and therefore wouldn’t have sense enough to be careful of where their feet are at all times. The complete opposite is true.

Shoe wearers mistakenly assume they are safe on an escalator

Most people wearing shoes probably just take that warning sign for granted and would never question it, as they see all those gnarly looking moving parts, with teeth that open up at the top only to bite down fast and hard at the bottom, which could chew up a bare foot in seconds. But the unfortunate implication of such a warning sign is, “as long as you’re not barefoot when going up and down on this mechanical monster, you’re safe.” And that’s where the problem mainly lies, as I’ll explain further along.

The fact is, just about every documented injury on an escalator has involved shoes, not bare feet. In fact, there have been a number of articles in the media in the last few years about various forms of footwear getting caught in escalator mechanisms and seriously injuring the wearers.

For example, in the Orange County Register a few years ago, the article “Escalating Problems” points out a rash of injuries that have occurred, mainly to children, in a popular Southern California mall. From the article:

The then 6-year-old boy screamed as his foot twisted in the grinding steel, his tennis shoe half-swallowed by the mechanical stairs.

It’s not only tennis shoes that are problematic for riding escalators. The U.S. Consumer Product Safety Commission has issued numerous warnings against children wearing Crocs on escalators. More details and other links on this same issue are pointed out in an article in the Atlanta Injury Law Blog.

So, what does all this have to do with banning bare feet? Good question, because there have never been any documented records of a bare foot ever being injured on an escalator. The only court case involving escalator injuries that I’ve been able to find that even mentions bare feet is Hunt v. City Stores, Inc., 387 So.2d 585 (La. 1980). Here again, a child was injured when his tennis shoes got caught in the escalator mechanism. The court stated:

[Roger Harris of Otis] said that the inconspicuous warning signs which caution against bare feet are the only ones used by Otis….  Despite knowledge of the danger presented to children in tennis shoes, Otis had not warned of that hazard.

Fear of bare feet seems to be mostly a U.S. problem

The notion of banning bare feet on escalators seems to be popular only in the United States. To my knowledge, no such signs appear on escalators in Europe or other parts of the world.

When I was in Fiji several years ago, the only escalator I saw, which was at the Nadi airport, had a sign that only warned against long skirts. It also advised to not put your feet near the edges on either side of the moving steps and to hold children’s hands. Nothing about bare feet. Bare feet are quite common in Fiji anyway, so I think most people just assume a barefoot person knows how to be careful without being told. (Would that folks had such an attitude here in this country!)

And a few years ago when I was in Victoria, BC, Canada, there was a sign on an escalator in a mall that read: “No carts. No strollers,” plus a pictograph depicting the same rules. Not a word about bare feet.

Someone also told me about seeing a sign on an escalator in Hong Kong that read: “Escalator users wearing sandals: Please beware of the edges of steps and mind your toes.” Nothing about bare feet.

‘Warning’ signs are based more on paranoia than facts or logic

In the U.S., the signs are generally placed there, not by the store or place of business in which the escalator is located, but by the escalator manufacturer. It would appear that such dire warnings are the result of (1) the perception, albeit greatly exaggerated, of increased litigious occurrences in the U.S., (2) ill-conceived hyper-safety concerns based more and more on protecting people from themselves, (3) picking an easy target (bare feet), because who’s going to argue with that? – nobody goes barefoot any more because everybody knows it’s so “dangerous.” But as long as the manufacturer warns at least against “something,” and that “something” is something that very few people would be doing anyway, it probably thinks such a warning gives it some protection from, or at least a defense against, potential lawsuits. After all, it made the effort.

Can you imagine the reaction if they were realistic about actually preventing injuries (rather than an ill-conceived attempt to just avoid lawsuits) and posted signs reading “No Shoes”? Or even “No Children” would go a long way to stop these injuries from happening.

Injuries to bare feet on escalators are highly unlikely

Of course, one might surmise that no bare feet have ever been injured on an escalator precisely because of the warning signs. No such conclusion could be logically reached. People do ride escalators while barefoot, in many parts of the world as I mentioned above, and also in the U.S. I have been a barefooter for many years, and I always ride escalators barefoot. And that includes those long moving walkways common in airports that are similar to escalators.

Other full-time barefooters, such as my fellow members of the Society for Barefoot Living, regularly ride them barefoot as well, sign or no sign. One member told me he has actually let his bare feet slide onto the teeth at the bottom or top with no problem; though it may look scary, he has found there’s really little or no danger of getting feet caught there. The most dangerous area is along the sides as the steps move up or down. The whole key to being safe on an escalator is being aware of where your feet are at all times. And that’s pretty easy when you’re barefoot – not so easy when your ability to feel the surface under your feet is blocked by some kind of footwear covering your feet.

I think the biggest problem with escalators is the false sense of security people may get from the signs that are placed on them, especially in the U.S. “No Bare Feet” implies that bare feet are not safe, but shoes are. Nothing could be further from the truth.  Not only that, the Peltzman effect certainly comes into play here as well.

The Peltzman effect refers to the hypothesis that implies that people react to safety regulations by increasing other risky behaviors and thus offsetting the safe behaviors. An example of this might be someone getting into a car and carefully putting on their seatbelt and adjusting the mirror, but then going out to the freeway and speeding recklessly. In this case, making sure seat belts are worn and mirrors properly adjusted create a false sense of security that lead to a false belief that speeding is not as dangerous as it really is.

Bare feet are safer than shoes on an escalator, all things considered

As to relative safety, I firmly believe that bare feet are much safer than shoes on an escalator. The reasons are:

(1) barefooters can feel and are aware of where their feet are at all times,

(2) barefooters are acutely aware that the moving parts of an escalator do have the potential of doing damage to feet, and

(3) barefooters aren’t lulled into the false sense of security that a shoe wearing person might get as a result of seeing the “No Bare Feet” signs, and so are extra careful.

Long hair, on the other hand, is a hazard on escalators. I always make sure mine is tucked up when near an escalator.

I’ve never seen “no bare feet” signs on escalators in Russia either. However, this summer in the Tsaritsyno park/museum, a security guard tried to stop me before the escalator shouting “Stop! You’ll damage your feet!” but I just went on.

I made a short video about barefoot safety on escalators (German, subtitled).
https://www.youtube.com/watch?v=EuF678UzhD4

Thanks for the video.

Of course. As I wrote in the last 3 points of my post, barefooters pay attention to where their feet are at all times, unlike shoe wearers. So they are safer on escalators than shoe wearers are.