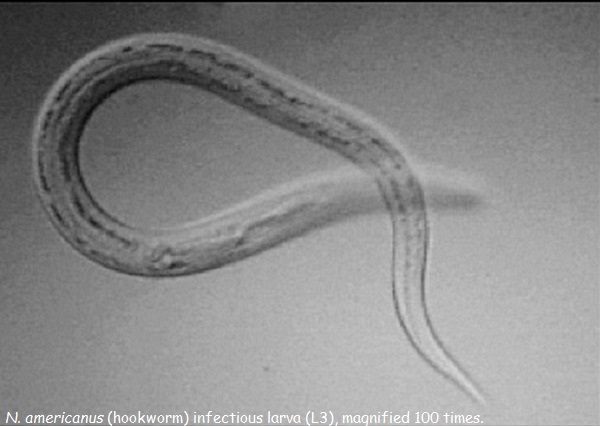 In the United States and other developed countries that have modern sewage systems, the chances of getting a hookworm infection from walking barefoot are practically zero.

According to the CDC (Centers for Disease Control), hookworm infection can be prevented by:

Those are not conditions that most barefooters are likely to ever be walking in.

In certain less developed countries around the world, the chances of getting a hookworm infection are slightly higher.

How do hookworms actually infect humans?

First, let’s talk about hookworms in general and their life cycles.

Hookworm is the common term referring to certain helminths (tiny parasitic worms) that can infect humans and animals by directly penetrating the skin.

Hookworm derives its name from the adult worm’s slightly bent over head resembling the shape of a hook.

There are other helminths that can infect humans as well, but not through skin contact, as they must enter the body through ingestion or other bodily openings.

There are two main types of hookworm species that could potentially infect humans, Ancylostoma duodenale and Necator americanus, with the latter being the most prevalent in the world.

Another much less common source of hookworm infection is from the zoonotic species Ancylostoma ceylonicum that has been found in some dogs and cats in Southeast Asia and remote parts of tropical Australia.

The actual process of infection is somewhat complex. It starts with the tiny hookworm larvae in their filariform stage (infective), each less than a millimeter long, that may be living in warm moist soil that has been contaminated with infected human feces.

Upon contact with skin, the filariform larvae are able to penetrate the skin, travel through the blood vessels and heart, and reach the lungs. Once there, they burrow through the pulmonary alveoli and travel up the trachea, where they are then coughed up to the throat and swallowed, traveling down through the esophagus to the stomach. There, they attach themselves to the intestinal wall and start sucking blood.

Within a few weeks they develop into an adults and are ready to mate. Eggs are produced, which exit the body in the human feces.

They molt twice within 10 days to become filariform (third stage, L3) larvae, which are infective. Filariform larvae can survive up to approximately four weeks in the right conditions (warmth, moisture, shade). They will die soon if exposed to direct sunlight or if they become dried out.

So, do barefooters need to be concerned about getting hookworms from walking around barefoot?

No, not really. Certainly not if you are in a developed country with a modern sewage system.

Even if you encountered some area that had been used by some person or persons as their outdoor toilet, unless they themselves had been infected with hookworms, and unless they had left the infected feces there less than three or four weeks ago, there is no way you could get infected.

Some parts of the world are more risky for hookworm infection

The prevalence of the conditions needed for hookworm infection is highest in areas with year-round warm, moist climates, such as the tropics and subtropics, and especially areas with poor sanitation and sewage control.

But what if you’re actually in such areas or parts of the world where hookworm larvae could potentially be on the ground?

In such places, paying attention to where you’re walking or standing is essential. Staying on clearly marked paths or roads where other people walk should be pretty safe, as it’s unlikely anyone is going to use a regular path or open area as their toilet.

Also, generally, standing still in one spot could be more risky than moving – walking or running – because infective hookworm larvae that you may step on need some time to attach themselves to your skin.

Simple contact of short duration with live hookworm larvae is not going to cause them to suddenly start burrowing into your skin. It’s been estimated that it takes at least five minutes or longer of constant exposure to the live hookworm larvae for them to attach to the skin.

However, be careful about walking in mud in such areas, because if it did contain infective larvae, the fact that mud sticks to the skin could give those larvae the time they need to begin penetrating the skin. If you do get mud on your feet, try to wash it off or remove it some way as soon as you can.

How would you know if you contracted a hookworm infection?

Humans who have been infected with hookworm usually have no specific symptoms, but eventually over time have a combination of intestinal inflammation and progressive iron-deficiency anemia and protein deficiency.

However, often, within a week or so after the larvae first penetrate the skin, a temporary itchy inflammation of the skin may develop, called “ground itch.” That should be a clue that you may have become infected, and should see a doctor for evaluation and treatment.

Fatalities due to hookworm infection are extremely rare, and it can be easily diagnosed, treated and cured with certain drugs known as anthelmintics. Even with no treatment, the worms will usually die and be eliminated from the body within one to two years, though they could live longer.

Catching hookworm infection from animals or animal feces is usually even less of a concern for barefooters.

Certain dog and cat hookworm larvae, such as Ancylostoma braziliense or Ancylostoma caninum, can penetrate the human epidermis (outer layer of skin), but cannot enter the dermis, and therefore remain trapped in the skin.

These larvae migrate extensively within the skin for a time, resulting in a very itchy but self-limited skin disease called cutaneous larva migrans – not the gastrointestinal infection that occurs with human hookworm infection.

As to humans actually getting infected with this type of animal hookworm, this is what the CDC has to say:

When people walk or sit on beach sand or soil where infected dogs or cats have defecated, the dog or cat hookworm larva can penetrate the skin of the foot or body and migrate in the top layers of the skin. This migration causes severe itchiness and raised red lines can form as part of the reaction to the larva in the skin. The larva will die in the skin after several weeks without developing any further, and the itchiness and red lines will go away.

Walking barefoot in the feces of other animals, such as farm animals – chickens, cows, horses, etc. – has never been found to cause any infections, parasites, or any other medical problems in humans.

Just a thought, but by walking barefoot, you develop a layer of protective dead skin on the bottom of your feet. Wouldn’t this add protection again hookworms as the dead skin is usually extremely thick and harder than regular skin on the feet?