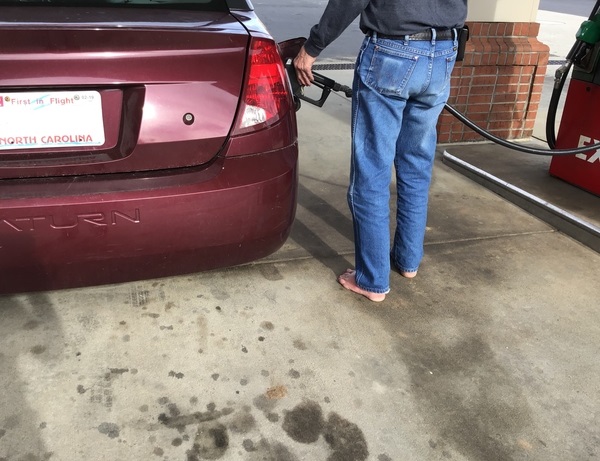 One question that newer barefooters sometimes ask is if there is any danger of toxic substances and chemicals on streets or other places they may walk absorbing directly into their bloodstream through the soles of their feet.

The short answer is no, as that is highly unlikely to happen.

Walking barefoot on dirty roads, streets, or floors does no harm

Of course, neither I nor anyone else could ever state definitively that there will never be a dangerous toxic substance on the ground or street where you walk barefoot that would cause you some harm by coming into contact with it. But given the facts that are known, and based on the real life experiences and anecdotal evidence of hundreds of barefooters I’m aware of over the years who have walked barefoot in all possible conditions and places, as well as there being no documented evidence to the contrary, no, you are not putting yourself in any danger by walking barefoot on dirty roads and streets. All that dirt and grime is superficial and does no harm.

The stratum corneum is relatively thick and is composed of 15 to 20 layers of flattened dead skin cells known as corneocytes. Their cells are filled with mostly filamentous keratin, and are embedded in a lipid matrix composed of ceramides, cholesterol, and fatty acids.

The stratum corneum functions to form a barrier to protect underlying tissue from dehydration, chemicals, mechanical stress, and infective bacteria.  As these dead cells fall off, or exfoliate, from the body, the lower layers of skin replenish the surface with additional keratin.

The thickness of the stratum corneum varies throughout the body. It is thickest in the palms of the hands and the soles of the feet. The mechanical stress of walking barefoot further thickens this layer by the response of the stratum lucidum, the next layer under the stratum corneum, which stimulates the cells to become more concentrated with keratin and become tougher before they rise into a typically thicker, more cohesive stratum corneum. This is the natural process whereby additional protection is provided to the soles of the feet in order to resist abrasion or impact and avoid injury.

Barefooters sometimes refer to this process as “callus” buildup on their soles.

Then how do transdermal medical patches work? The composition of any chemical exposed to skin,  primarily its molecule size and solubility, determines its possibility of entering the skin or absorbing into the bloodstream. Transdermal patches work because:

(1) their special formulation has been chemically engineered to contain molecules that are not only soluble in skin, but small enough to penetrate and absorb into the bloodstream; and

(2) they must remain on the skin constantly over a long period of time. These are hardly conditions to which barefooters’ feet are normally exposed, regardless of where they walk. In addition, medicinal patches need to be placed in the areas of the skin that are most likely able to absorb the medication. The soles of the feet, even disregarding the obvious practical problems of such placement, could never be an effective area to absorb medication through the skin and into the bloodstream.

Many substances will absorb into the skin only, but not into the bloodstream

Keep in mind, when talking about substances coming into contact with bare skin, or more specifically, bare feet, there is a big difference between absorption and penetration. Most substances, particularly in the liquid form, will absorb to some extent into the outer layer of the skin – including water. Very few substances will penetrate further than that with the potential of getting into the bloodstream.

The internet includes much false or misleading information about skin absorption

Myths and dire warnings about skin absorption are all over the internet. Most are based on nothing more than hypotheses without actual facts or studies to back up the fears or claims stated.

You cannot get drunk by soaking your feet in alcohol (vodka)

For example, if the skin on the feet could easily absorb liquids into the bloodstream, then surely you could get drunk by soaking your feet in alcohol or an alcoholic beverage. That myth was strongly believed for many years (and may still be by some) until three Danish doctors decided to test it to find out the true answer. Their experiment is described in The Chronicle Flask article, “Can you get drunk through your toes?“

The results were also published in the British Medical Journal article, “Testing the validity of the Danish urban myth that alcohol can be absorbed through feet: open labelled self experimental study.”

Tasting garlic by soaking your feet in it is a myth

Another myth relates to garlic. And this is more strongly believed than the alcohol myth, probably because so many sources promote the belief.

It is claimed in several articles on the internet that rubbing garlic on your feet will cause it to absorb into the bloodstream and get into your body, so you can taste it in your mouth, as well as people can smell it on your breath.

This article in Popular Science, “You can taste garlic with your feet,“ makes the same claim.

I always look at things like that with skepticism, so I decided to test it for myself. I bought a head of garlic at the store and tested it the next day while it was fresh. I basically followed the same procedure as is described in this YouTube video, “You Can Taste Garlic with Your Feet!?,” (which also claims the phenomenon).

Except that I did not use just one garlic of clove, I used about six or eight on each foot. I chopped them up, placed them in two plastic grocery bags, put a foot in each of them, and tied them around my ankles. I kept them on for about two hours, during which I spent some time just sitting at my computer, but also walking around, further crushing the garlic under my feet as I walked. If it was going to absorb into my skin, and/or into my bloodstream, I definitely gave it every opportunity to do that.

I noticed while I was waiting for the absorption – if any – I could definitely strongly smell it, coming from the plastic bags on my feet.

I kept waiting for the taste in my mouth. I never came. So, after about two hours, I asked my wife to smell my breath for garlic. Nothing. No garlic smell there at all.

As mentioned before, the vast majority of substances we encounter or touch on a daily basis may absorb into the outer layer of skin, but will not absorb into our bloodstream and into our bodies.

An internet search for potential skin absorbable chemicals or other substances will reveal results that range all over the place. These range from claims that practically anything that touches your skin will end up in your bloodstream to more reasoned findings that some chemicals and other substances could absorb and penetrate into the bloodstream given certain conditions (quantity of the chemical, total time or frequency of exposure, area of the skin, etc.), with the unlikelihood of many other chemicals being able to ever dermally penetrate into the blood stream.

Most claims of various chemical or other substance absorbability into the bloodstream through the skin are based for the most part only on hypotheses, as there are little to no actual scientific studies for those conditions in human beings, and very few involving animals.

One of the most comprehensive reports about dermal absorption is a 503-page document from the World Health Organization entitled Dermal Exposure. It covers every chemical or other substance that anyone worldwide could possibly ever be exposed to and the effects such exposures may have on human skin. The skin effects reported and documented relate only to skin issues; there is nothing there about anything absorbing into the bloodstream.

Let’s look at the three conditions where certain chemicals could hypothetically absorb into the skin and penetrate to the blood supply, as particularly would apply to someone going barefoot.

Quantity of the chemical
Barefooters aren’t soaking their feet in it. They may come into superficial contact with something on the ground or pavement as they walk across it. Even if some minute amount sticks to the soles of the feet, it will quickly wear off as one continues walking.

Total time or frequency of exposure
If a barefooter did step in or walk across a chemical that has the potential to absorb and penetrate, the period of exposure is likely to be only a few seconds.

Area of the skin
The soles of the feet have the thickest skin of any other part of the body. Absorption of anything into the soles of feet, especially soles that have been made even thicker and more resilient over time from barefooting, is highly unlikely.

Below is a brief list of a few common substances that people are sometimes exposed to that may come into contact with the skin. This list is by no means all inclusive. Some of these may be highly toxic if inhaled or ingested. Some will damage the skin itself from long term exposure.

However, though no clear evidence exists that would indicate any of these products could actually penetrate beyond the skin and absorb into the bloodstream from only brief dermal exposure, I have categorized the list into three sections, based on the best available information, both scientific and anecdotal.

The quote below is from the article “Entry and Fate of Chemicals in Humans” by the Extension Toxicology Network, a project of Cornell University, Michigan State University, Oregon State University, and University of California at Davis. This is referring to exposure in general, not specifically to dermal exposure.

The total amount of exposure [to toxic chemicals] can have different results depending on whether the exposure occurred all at once or repeatedly over time (the time course of exposure). A high dose given once may have a toxic effect while the same total dose given in small amounts over time will not.

So, for all practical purposes, merely touching or stepping on potentially toxic substances while walking barefoot is not going to cause them to absorb into the body, any more than touching or stepping on any other liquid or substance at all will cause it to enter the body. Otherwise, there’s no way you could even exist in this world as humans beings if you absorbed everything you touch; humans would basically be sponges.

Perhaps just watching where you step is precaution enough. In my 62 years I have yet to stand long term in a puddle of any toxic chemical.

If I have doubts about it I step around it. Simple. Still fun to watch fools wearing boots stomp right through it. That might be the origin of the concern among the chronically shod. They assume everyone is as oblivious as they are.

I’m not even aware of where any toxic chemicals might exist where I’d ever be walking barefoot. Yet I do go barefoot everywhere. I mean real “toxic” substances, not those merely undesirable based only on squeamishness.

The “non-pet-friendly” ice-melt stuff can bring on a noticeable stinging sensation in a fairly short time. I think that’s calcium chloride based. Magnesium chloride is the more benign variant…

This and many other chemicals can indeed damage the skin with more than very short term exposure. But it will not penetrate farther and get into the body by way of the bloodstream.